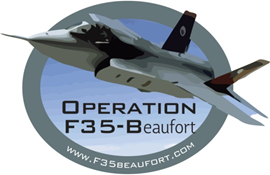 With existing foundation work provided by the Chamber and Lowcountry Economic Network, Williams Group/PR provided overall PR management to ensure consistent messaging and calls to action. The goal: Bring 300 people to the June 22 Defense Department public meeting on the F-35B. The outcome of that meeting: More than 750 people attended, with a majority sharing positive support for the client’s position.

We reviewed and revised the preliminary marketing plan; extended the advertising buys without increasing the budget by packaging ad runs; coordinated artwork and copy for four billboards; scripted six 30-second radio spots that ran on five area FM stations; scripted video spots (15-, 30- and 90-second versions) for use on area channels; project managed a podcast/videocast that featured six local leaders sharing key messages about the F-35B’s impact on the local economy and community, with the video file being shared via YouTube and Facebook; coordinated media relations including news releases, story pitches, and ghostwriting articles.

We coordinated letter writing by key community figures supporting various elements of the client’s desired position; created print ads and posters with a special call to action to attend the public meeting June 22 or to submit written comments by July 12; coordinated media previews and coverage of the June 22 public meeting; negotiated use of a key Beaufort storefront display window for posters and flat-screen TV for videos of the F-35B; provided counsel to the client regarding overall positioning and calls to action.

We did all this on a compressed timeline, responding to Eastern North Carolina’s moves and trying to move one or two steps ahead of them in the “sweepstakes” for the F-35B training center and squadrons. We adapted, updated and revised our approach about every 10 days.

On Dec. 9, 2010, the Department of the Navy and Congressional leaders announced that Marine Corps Air Station-Beaufort would receive the client’s preferred alternative of three operational F-35 squadrons and two training squadrons. Positive comments ran 71 percent for the client’s position despite an aggressive opposition campaign.

This campaign earned ‘Best in Show’ from the American Chamber of Commerce Executives in August 2011, besting finalists from the Cayman Islands and Kansas City.

Back To Our Work